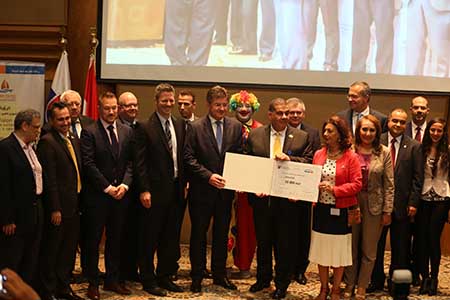 Yesterday, Hospital 57357 was blessed with the visit of a fine Slovak Republic delegation headed by its Foreign Affairs Minister and Deputy Prime Minister, HE Miroslav Lajcak to deliver in person a generous donation and visit the children. After a warm welcome by the children at the Hospital entrance, the Minister was guided by Dr. Amro Ezzat Salama, 57357 Board of Trustees President and Dr. Sherif Abouelnaga, Hospital 57357’s CEO to the Auditorium where the Minister was briefed about the history of the establishment of the Hospital as well as its future expansion plans.

Like a ripple effect, charitable actions tend to perpetuate themselves in time creating a solid worldwide chain of solidarity around Hospital 57357. It was not long ago, precisely during the second half of June that Hospital 57357 was launching its new oxygen generation and pumping station thanks to the concerted effort and contributions of Atlasco Egypt and Slovakia’s Oxymat, the second oldest co. and top leader in oxygen generation pumps. The cost of the pump was split and borne by the two companies in favor of Hospital 57357. During the Launch, Slovakia’s Ambassador to Egypt pledged to continue supporting the Hospital.

Two months later, Slovakia’s Minister of Foreign affairs insists on taking time to visit the Hospital despite a tight schedule to offer a generous contribution on behalf of his country. Addressing the audience after Dr. Abouel Naga’s presentation, the Minister thanked all the Hospital staff for their devotion and commitment to the children with cancer, emphasizing that there is no action nobler than curing a child with cancer.” We are already in the 21rst century and there are still diseases like cancer which are very difficult to cure, said the Minister; “ that is why while you, healthcare professionals are doing all the fighting to combat the disease, it is the duty of the rest of us to stand beside you”, he added.
The Minister also thanked the Egyptian Company Atlasco for having given his country the opportunity to support the Hospital.

During his quick tour of the Hospital, the Minister was guided to the Art Therapy room on the third floor where the children had embroidered Slovakia’s Flag on a cushion as a token of gratitude for his kind visit. He also visited patients in their rooms on the same floor. In the chemo therapy room, while talking to the mother of a patient who comes from a far-away province, Dr. Abouel Naga explains to our esteemed guest that some families are from such a modest background that the Hospital is obliged to also bear their transportation costs to secure their children’s treatment and follow-up. “There are no rich or poor in front of this disease”, commented the Minister, and Dr. Abouel Naga to reply: “ We have to thank God for our health, and we have to work together to overcome the disease” he then proposed to the Minister to explore collaborations in research and training in this field.

The Minister was so impressed by his tour that he pledges to share what he saw with his peers back home and to pursue his country’s continuous involvement and support to 57357. Just before leaving HE had a glimpse of Hospital 57357’s new capacity expansion construction site where builders are already on the go to turn the Hospital into a Health Sciences Campus equipped to realize our vision of becoming a unique worldwide icon of change towards a cancer-free childhood.