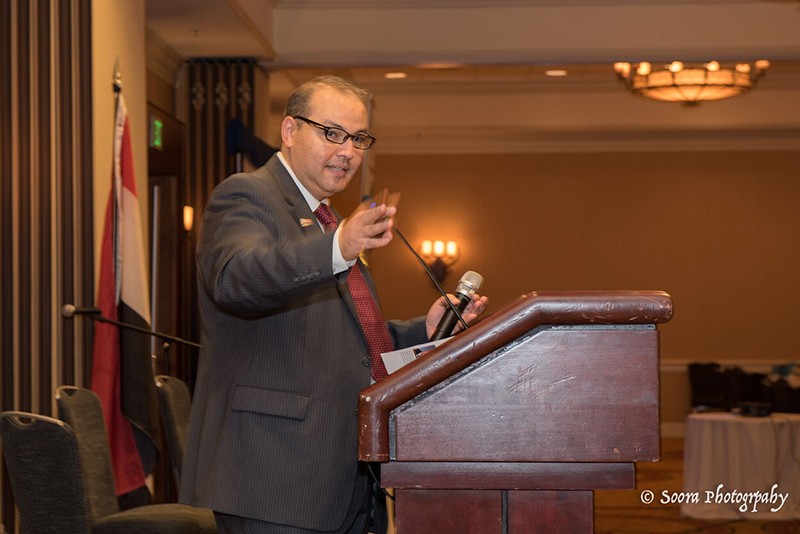 This year, Ramadan is bringing along the birth of a new chapter in the Bay area, new expectations, and bigger challenges for ECN in the U.S.

On May 8th, 2016, the nascent ECN San Francisco chapter held its first fundraising dinner with over 150 attendees, members of the Egyptian community in the Bay Area, Northern California. The organizers of the event, namely Ahmed Tantawy, Tamer Kira, Safaa Ibrahim, Khaled El Mishad, Noha Wagdy, and countless volunteers were satisfied it had fulfilled its social and fundraising goals. Many of the guests had never heard of 57357 and expressed enthusiasm for the Hospital’s humanitarian mission of providing top quality care and cure to Egyptian children with cancer for free. They conveyed their interest in contributing to its current capacity and program expansion projects; enabling it to almost double the number of admitted patients (from 45% to 80% of annual pediatric cancer cases in Egypt)

The night began with opening comments from Jawal Nabulsi, founder and CEO of  Nebny Foundation. Then, Ambassador Lamia Mekhemier, Consul General, who made a special trip from Los Angeles, expressed how proud she was to be Egyptian and  praised the work and action of Hospital 57357 in Egypt.

Highlights of the event were the slide presentation of guest speaker Dr. Hisham Seify, president and Chairman of the Board of ECN, the talk of keynote speaker, Dr. Hesham Dinana, VP of consultancy management firm, Solving EFESO Egypt, about the new 57357’s capacity expansion project, and the touching testimonial of 12 year old Mohamed Elawadi, a four year cancer survivor.

Dr. Seify gave the history of the hospital and talked about the establishment of Egypt Cancer Network, a fundraising, US- based tax -deductible charitable organization affiliated to Hospital 57357 and committed to the support of the Hospital and Egyptian hospitals and non-profits focused on cancer.

As for Dr. Dinana, he flew all the way from Cairo to present 57357’s new expansion project which will turn the actual Hospital into a Health Sciences Campus including a Health Sciences Academy, an advanced reseach center, a proton therapy installation and a 300 bed in-patient tower. Dinana’s firm, Solving EFESO is the consultant of Hospital 57357 for development and expansion projects. It is noteworthy that before the start of Ramadan, the contractor for two main buildings of the campus is already mobilizing the sites to start construction.

Twelve year old Mohamed Elawadi, a four year cancer survivor captured the crowd’s attention and emotions as he told of his sometimes horrendous journey through treatments for Leukemia as an 8 year old normal boy. His sense of humor during his speech was bittersweet and he was awarded with a standing ovation from the crowd.
The Dinner which was animated by a trio of Musicians, Aswat, which had everyone singing and recalling many happy memories of Egypt.The guests departed delighted with their evening and enthusiastic about extending further support to the Hospital and its new expansion.