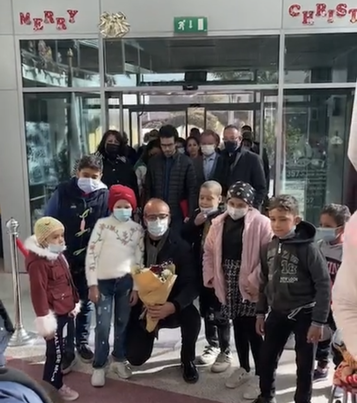 The beginning of the new year has brought along a unique visit from the great musician, Nader Elabssy to the Children’s Cancer Hospital 57357. El Abassy is famously known as the artistic director of the orchestra of two iconic events, the golden parade of Egyptian royal mummies, and the grand opening of the road of rams at Luxor.  With flowers in their hands, the children welcomed and cheered the great maestro on his first visit to the hospital and gathered for a memorial photo.

The Hospital’s CEO Prof. Sherif Abu-Elnaga gave a short presentation about the hospital ‘s achievements since inception and the challenges it faces, especially during the Corona pandemic. According to El Abassy, the performance presented by CCHE57357’ chorale composed of a group of survivals along with volunteers was really impressive to him as well as the hospital’s leading role within the field of pediatric oncology in Egypt. During his visit, the great maestro was invited to launch the soft opening of the recreation center which had started as an art therapy workshop in a small room on the third floor.   Art therapy was established in 2016 to lift up the spirits of sick children “A place where patients can develop their artistic skills and at the same time be able to distance themselves from the ordeal of their illness “, reveals Amani Ibrahim, head of the art therapy department at CCHE57357, explaining the significant role of establishing an art therapy at a pediatric oncology hospital. The workshop was so popular among the patients that it needed to expand and diversify its activities. “I am impressed with the idea of allocating space in a hospital to cater to the psychological and artistic needs of the patients”, said El Abassy expressing his appreciation for the establishment of the new recreation center that will offer a variety of artistic activities, enabling patients to express themselves in  different ways and  where they would feel that they are capable of being creative and conquering their illness.