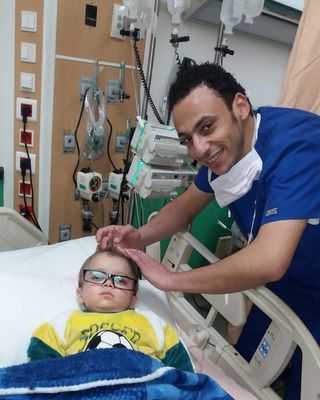 Mohamed, a playful kid, was only three when he came to CCHE57357’s screening clinic suffering from a skin rash, bulging eye balls and a fever.

His parents never expected such a malicious condition until the results of the preliminary examinations confirmed his serious illness. Mohamed was diagnosed with a rare disease named Erdheim–Chester disease.

Erdheim– Chester disease ECD is an extremely rare and life-threatening disease, less than 500 people worldwide are diagnosed with this disorder.  As such the accurate diagnosis was only half of the battle. ”Mohamed’s critical condition was very challenging for several reasons, the most important of which was the time factor, as it was not on our side”, shares Dr Mohamed Sedky, primary pediatric oncology consultant about the extremely serious health condition of Mohamed because of his enlarged dysfunctional kidneys. Due to the scarcity of information about this type of disease and treatment, the treating doctor had sought consultation from his French peers for a proposed treatment. Shortly after, Mohamed started on the second line of treatment at CCHE57357 with so many concerns about the young boy’s possibility of survival.  “The disease was still progressing during the first line of treatment that’s why we shifted to the 2nd line of treatment,” clarified Dr. Sedky

“CCHE57357 has given us another chance of hope in life”, shares Mohamed’s Mother  as she felt grateful for the availability of a non-profit medical institution with experienced medical staff without burdening’ patients’ families with extreme treatment costs.

Six months later, examination results indicated that the second line of treatment had succeeded to bring disease activity to a halt. However, few months later, Mohamed’s lab investigations revealed a higher level of creatinine which indicates that his  kidneys were not working well.  Based on the new lab results, the medical team of our warrior opted for the third line of treatment. “It was the last card to win this tricky game with the disease”, Dr Sedky added.   After 6 cycles of the new treatment plan, the results of the PET CT showed a great response to this treatment after a tough period of medical condition upheavals.

CCHE57357 medical team has exerted all needed efforts to save Mohamed’s life from a dreadful disease until they’ve efficiently helped him to reach the follow-up stage.