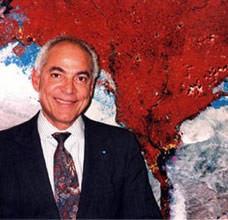 Dr. Farouk El-Baz is Research Professor and Director of the Center for Remote Sensing at Boston University, Boston, MA, U.S.A. He is Adjunct Professor of Geology at the Faculty of Science, Ain Shams University, Cairo, Egypt. He is also a Member of the Board of Trustees of the Geological Society of America Foundation, Boulder CO. He was born on 1 January 1938 in the Nile Delta town of Zagazig. Twenty years later, he received a B.Sc. in chemistry and geology from Ain Shams University, followed by a scholarship for graduate study. In 1961, he received a M.S. degree in geology from the Missouri School of Mines and Metallurgy; his performance won him membership in the honorary society of Sigma Xi. In 1964, he received a Ph.D. in geology from the University of Missouri after conducting research in 1962-1963 at the Massachusetts Institute of Technology (MIT), Cambridge MA. In 1989, he received an Honorary Doctor of Science (D.Sc.) degree from the New England College, Henniker NH.

Dr. El-Baz taught geology at Assiut University, Egypt (1958-1960) and the University of Heidelberg, Germany (1964-1965). He joined the Pan American – U.A.R. Oil Company in 1966, where he participated in the discovery of El-Morgan, the first offshore oil field in the Gulf of Suez.

From 1967 to 1972, Dr. El-Baz participated in the Apollo Program as Supervisor of Lunar Science Planning at Bellcomm Inc., a division of AT&T that conducted systems analysis for NASA Headquarters in Washington DC. During these six years, he was Secretary of the Landing Site Selection Committee for the Apollo missions to the Moon, Principal Investigator of Visual Observations and Photography, and Chairman of the Astronaut Training Group. His outstanding teaching abilities were confirmed by the Apollo astronauts. While circling the Moon for the first time during Apollo mission 15, Alfred Worden said, “After the King’s [Farouk’s nickname] training, I feel like I’ve been here before.”

During the Apollo years, Dr. El-Baz joined NASA officials in briefing members of the press on the results of the lunar missions. His appeal rested in a unique ability to simplify complex issues in clear, succinct and easily understood words. His remarks on the scientific accomplishments were regularly quoted by the media during the Apollo missions.

In Episode 10 (“Galileo Was Right”) of the TV series “From the Earth to the Moon,” produced by Tom Hanks for HBO, his role in the training of the Apollo astronauts was featured in a segment entitled: “The Brain of Farouk El-Baz.” In his honor, the popular television program “Star Trek: The Next Generation” featured a shuttle craft named “El-Baz.”

After the Apollo Program ended in 1972, Dr. El-Baz joined the Smithsonian Institution in Washington DC to establish and direct the Center for Earth and Planetary Studies at the National Air and Space Museum. At the same time, he was elected as a member of the Lunar Nomenclature Task Group of the International Astronomical Union. In this capacity, he continues to participate in naming features of the Moon as revealed by lunar photographic missions.

In 1973, NASA selected him as Principal Investigator of the Earth Observations and Photography Experiment on the Apollo-Soyuz Test Project (ASTP), the first joint American-Soviet space mission of July 1975. Emphasis was placed on photographing arid environments, particularly the Great Sahara of North Africa and the Arabian Peninsula, in addition to other features of the Earth and its oceans.

Emphasizing the study of the origin and evolution of arid landscapes, he collected field data during visits to every major desert in the world. One of his significant journeys took place, soon after the United States and China had normalized relations in 1979, when he coordinated the first visit by American scientists to deserts in northwestern China. The six-week journey was chronicled in National Geographic and the Explorers Journal. His research on the origin and evolution of the desert resulted in his election as a Fellow of the American Association for the Advancement of Science (AAAS).

Prior to embarking on extensive field trips to harsh deserts, Dr. El-Baz analyzed space photographs utilizing innovative techniques to select sites for detailed ground investigation. He first used this approach in the Western Desert of Egypt and soon applied the method to study deserts in Kuwait, Qatar, United Arab Emirates (U.A.E.), Sultanate of Oman, the deserts of China, and the Rajasthan of India.

Dr. El-Baz served his native land as Science Advisor to the late Egyptian President Anwar Sadat from 1978 to 1981. Because of population growth and the attendant food requirements, Sadat believed that Egyptians should not continue to be confined within the Nile Valley and must reclaim more land from the desert.

El-Baz was assigned the task of selecting desert tracts to develop, without detriment to the environment. He traveled to Egypt’s far corners and described each region’s natural resources and how they could be most wisely used. The many projects that began during those four years continue to help the people of Egypt today. In 1995, the Governor of the Province of Dakahliya, in the eastern part of the Nile Delta, gave him the “Distinguished Son of Dakahliya Award” and inaugurated the “Farouk El-Baz Primary School” in his ancestral village of Toukh El-Aqlam.

His desert research, spanning over 25 years, helped in dispelling the public misconception that deserts were man-made and explained how arid lands originated and evolved in response to global climatic variations. His research methods are now commonly replicated in desert studies throughout the world.

From 1982 to 1986, Dr. El-Baz was Vice President of Science and Technology at Itek Optical Systems, Lexington MA. He oversaw the application of data from the Space Shuttle’s Large Format Camera. The photography of this advanced system assisted greatly in El-Baz’s program of desert study from space.

He was elected Fellow of the Third World Academy of Sciences (TWAS) in 1985, and became a member of its Council in 1997. He represents the Academy at the Non-Governmental Unit of the Economic and Social Council (ECOSOC) of the United Nations (UN), New York.

In 1986, Dr. El-Baz joined Boston University as Director of the Center for Remote Sensing to promote the use of space technology in the fields of archaeology, geography and geology. Under his leadership, the Center has grown to become a leading force in the applications of remote sensing technology to environments around the world. In 1997, NASA selected it as a “Center of Excellence in Remote Sensing.”

Research at the Center has particularly pushed forward the frontiers of applying remote sensing in archaeology. For example, Dr. El-Baz developed a methodology for nondestructive investigation of a sealed chamber containing a disassembled boat at the base of the Great Pyramid in Giza, Egypt. He reported the results of this unique investigation in National Geographic and American Scientist, as well as many print, radio and television interviews. He also contributed an article on worldwide applications of remote sensing to archaeology in the “1991 Yearbook of Science and the Future” of the Encyclopedia Britannica, and another to the August 1997 issue of Scientific American.

The Gulf War of 1991 presented an opportunity for Dr. El-Baz to disseminate knowledge of the desert terrain with emphasis on the effects of environmental disturbances. As chairman of the committee on Environmental Hazards and Global Change of the TWAS, Dr. El-Baz led a team of scientists on a fact-finding mission to six Gulf States. His findings were reported in the media throughout the world including on the Evening News of the British Broadcasting Corporation (BBC) and interviews on CBS News and CNN. Print media interviews with Dr. El-Baz appeared in the New York Times, Washington Post, Boston Globe, and newsmagazines such as Time and Newsweek.

Throughout his career, Dr. El-Baz has succeeded in conveying the excitement of scientific research and the importance of using advanced technology. One of his efforts resolved the 1995 controversy about the crowd size in Washington DC’s “Million Man March”. He estimated the number of participants in the march using the same computer techniques applied to counting sand dunes in the desert.

Dr. El-Baz is well known as a pioneer in the application of space-borne data to ground-water exploration. He utilizes satellite images to identify fracture zones, and radar data to reveal sand-buried courses of former rivers. He successfully applied these methods in the arid lands of Egypt, Somalia, Sudan and Oman. His findings alleviated shortages of ground water in areas of dire need. This won him the M.T. Halbouty Human Needs Award of the American Association of Petroleum Geologists (AAPG). He was also appointed Senior Advisor to the World Bank/UN World Commission on Water for the 21st Century.

He is an accomplished author or editor of twelve books, including Say it in Arabic, The Moon as Viewed by Lunar Orbiter, Apollo Over the Moon, Egypt as Seen by Landsat, Deserts and Arid Lands, The Gulf War and the Environment, and Atlas of the State of Kuwait from Satellite Images. He has contributed over 200 scientific papers to professional journals, supervised numerous graduate students, and lectured in academic institutions and research centers worldwide.

Dr. El-Baz is a member of the United States National Committee for Geological Sciences of the National Academy of Sciences. He serves on the Board of Trustees of the new Alexandria Library, the Arab Science and Technology Foundation, the Egyptian Center for Economic Studies, the Egyptian-American Affairs Council, the Moroccan-American Council, the World Affairs Council of Boston, as well as the editorial boards of several international professional journals. He is a member of many national and international professional societies and a Fellow of the Geological Society of America, the American Association for the Advancement of Science, the Royal Astronomical Society (London), and the Explorers Club (New York).

He has won numerous honors and awards, including NASA’s Apollo Achievement Award, Exceptional Scientific Achievement Medal, and Special Recognition Award; the University of Missouri Alumni Achievement Award for Extraordinary Scientific Accomplishments; the Certificate of Merit of the World Aerospace Education Organization; the Golden Door Award of the International Institute of Boston; the Award for Public understanding of Science and Technology of the American Association for the Advancement of Science, and the Arab Republic of Egypt Order of Merit – First Class. He also serves as President of the Arab Society for Desert Research.

In 1999, the Geological Society of America (GSA) established the “Farouk El-Baz Award for Desert Research,” an annual award aimed at encouraging excellence in arid land studies.