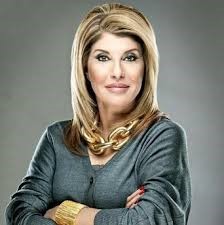 Hala Sarhan began as a broadcaster in the Arab section of Voice of America, then worked as a reporter for the Middle East and Sedeti magazine , and then as a journalist in Kalam al-Nas magazine, which was then owned by her ex-husband Imad al-Din Adib . She also worked as a reader of an English-language bulletin from 1972 to 1976 on Egyptian television.

Hala Sarhan has also served as a broadcaster on Egyptian TV and an anchor for a number of programs, including Transit and Egypt in the Eyes of the World, Rule of Law and the Film Archive. Dr. Hala Sarhan joined the Arab Radio and Television Network from 1993 to 1999 when it was broadcast from the Italian capital of Rome . She was the owner of mass programs on the Arab screen, including the program Ya Hala with Hala Sarhan and the program of the night with Hala Sarhan and frankly with Hala Sarhan presented on the channel art variety . After that, Dream Channel was the station and worked from 2000 to 2003 as Vice President of Dream Channel, where she presented the programs of Hawa Hwana, Hila Shaw and reality.

Hala Sarhan has a distinguished journalistic record, where she served as editor- in- chief of Ladies and Gentlemen magazine , general manager of the Arab Media Publishing and Publishing Company, general manager of Arab Radio and Television’s Media Office, Rapporteur of the Women and Family Programs Division of Arab Radio and Television, , And the Deputy Editor-in- Chief of Sedti Magazine . Hala Sarhan was a broadcaster at Voice of America and a reporter for the magazine Al-Sharq al-Awsat in Washington. She was a teacher at the Institute of Dramatic Arts and the Academy of Arts and worked as a professor at the Art Academy of the Academy of Arts and a teacher at the Academy of Arts in Giza.

She has worked in several magazines and satellite channels such as Arab Radio and Television in the Art Variety Channel, where she presented public dialogue programs such as: “Yahla” program, and then moved to Dream 2 channel, which she chaired and presented the program “In Blocked”, a political program was one of the first political programs The independent satellite TV on a special Egyptian screen, and the “Hala Shaw” program, an entertainment program. And then moved to Rotana Cinema channel, which was presided by and presented by the program “Cinema and people” and also established Rotana Zaman channel and provided on Rotana screens 6 television programs are Hala Shaw and Jana Al-Hawa and people and summer and cinema and summer and five stars and Hawa Hwana moved to the Lebanese Broadcasting Corporation Where she presented the “Five Star Channel” program. She returned to Egypt after the January 25 revolution and presented a new program, Nas Book , discussing political issues and focusing on the themes of the revolution on Rotana Egyptian channel. In a number of her television programs, Hala Sarhan hosted a number of Egyptian and Arab political figures. She also discussed a number of issues that some considered “taboo” or “difficult to discuss in Arab satellite channels”, bringing her praise and criticizing others. [3]

During her career, Hala Sarhan wrote several books, including: