Another achievement by one of 57357’s professionals: Dr. Sameh Saad receives the State award for excellence in basic sciences 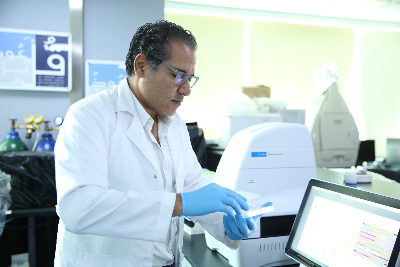 Dr. Saad: in 57357, the researcher feels the value of his work because of the direct interaction between the clinical and the research sides

We have important research work in leukemia and brain tumors, we pursue to better understand  the metabolism mechanism of the cancer cell to be able to stop its growth.

A new achievement by one of Hospital 57357 family members, Dr. Sameh Saad, head of the tumor biology unit and director of metabolic studies lab, wins the state award for excellence in basic sciences for his multiple researches in the field of tumors and aging, which is considered a valuable addition to this field during the last few years.

Dr. Saad graduated from the Faculty of Science, Ain Shams University in 1988. He got a master’s and a PhD degrees with a scholarship from Tohoko University in Japan. In 2000 he got a scholarship for post PhD studies from Washington University, USA, where he converted from chemistry studies to medical and biological studies. He published important research work in the field of aging, Alzheimer, and Parkinson’s disease in major scientific magazines. He received a patent for a medication for Parkinson’s disease. In 2005 he received an excellence award from the University of California. He established his lab and pursued publishing his researches studies before returning back to Egypt.

Dr. Saad shared with us: I’ve been working for 57357 for three years. Before that I was working for Zewail University. I had several opportunities to work abroad in distinguished positions but Hospital 57357 enticed me to stay in Egypt. In 57357 I found echo to my scientific dreams, as the board of trusties, the board of directors and the upper management strongly believe  in the importance of scientific research. The upper management encouraged me to pursue my research as they believe that research is the basis of any development and progress in the medical field. Moreover,  Egyptian Americans thru Egypt Cancer Network, ECN in the USA, an affiliate of 57357 are providing  support and resources to the Hospital not just in the areas of patient care but also in research. This comprehensive 57357 organization with its long-range vision made me realize how unique and exceptional it is, and I desire to contribute to its success and development. Moreover, work in 57357 is stimulating because of the direct interaction between the clinical and the research sides, which makes the researcher feel the importance of his work which will directly impact the patient’s outcome and improve its chances of cure.

Currently we conduct multiple studies including one on leukemia, and on two types of hard brain tumors. Through these studies we try to study the transformation of normal cell to cancer cell through understanding the metabolism mechanism of the cancer cell, and interfering in the cell’s metabolism which facilitates its control and  the stopping of its growth. This approach leads to improving the technique and quality of treatment through increasing its effectiveness and eliminating its side effects.

another research we are involved in is related to Covid 19 (Corona virus) where we pursue to identify the reason and the mechanism of coagulation in patients infected with the virus, which lead to raising mortality rate.  This virus is dangerous as its behavior is different than other viruses, it rapidly mutates and spreads easily, which makes it hard to control despite all the efforts and expenses.

I am also involved in a research in the field of cardiology through which we study the change of the heart condition during sleeping and the effect of the biological clock on vital functions. We also try to find explanation for heart attacks incidences in the early morning.