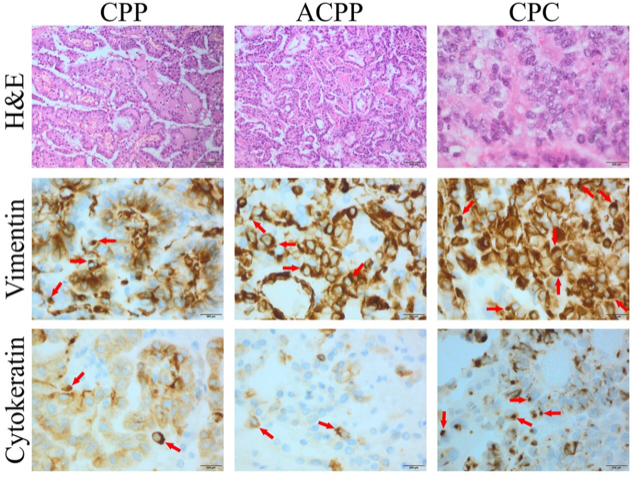 Choroid plexus tumors (CPTs) is a rare type of brain tumors that mainly occur in children. Physicians consider several factors before deciding the best treatment strategy, one of them is the expected outcome of the disease over a certain time period, which is termed ” prognosis”.

In a new study published in the journal of “Neuro-Oncology”, a research team led by Dr. Shahinda El-Naggar, head of 57357’s research Department have uncovered a novel prognostic marker for CPTs termed “Aggresome”.

​Aggresome is a waste compartment that could protect the cell by collecting toxic proteins from the cell milieu. Thus, they are considered a part of the cell protein quality control (PQC) machinery.  However, the protective shield of aggresomes could be harnessed by cancer cells, rendering the tumors more aggressive.

To reach these findings, the team examined  42 CPTs tissues archived at the Children’s Cancer Hospital Egypt 57357 Pathology Department. Thereafter, they have   successfully identified a correlation between the percentage of tumor cells containing aggresomes and disease severity. They report tumors having more than 25% aggresome positive cells being the most aggressive; which may affect the treatment decision.​

Traditionally, CPTs are classified according to their histological features (how they look under the microscope) into 3 subgroups, while advanced molecular classification divides this type of tumor into 2 distinct subgroups. Interestingly, all of the aggressive histological and molecular subgroups contained aggresomes.

In the current study, the team decided to further investigate the altered pathways in the aggresome-positive CPTs.

“Unraveling the main altered pathways in CPTs could deepen our understating of the disease pathogenesis, it might also uncover novel therapeutic targets” Nada Amer, the first author on the paper said.

After performing several advanced techniques the team report altered pathways related to protein quality control. They also report that a set of essential genes for normal brain development was inactive. Those pathways will be further studied in the future.

“Overall, our data support that aggresomes are not only a valuable prognostic marker but might also offer a potential target for CPTs treatment in the future.” El-Naggar says.

The team would like to thank ECN’s farsighted vision and support to research efforts in CCHE 57357.