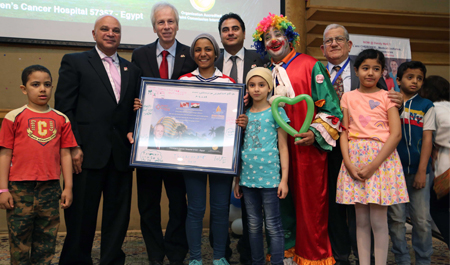 Children are the same everywhere, they want to laugh, play, and dream of a bright future.
To safeguard our children’s basic rights, our duty as citizens of the world is to support each other and those who take care of them with care and love as in Hospital 57357
‘Touching’ and ‘compassionate’; these are the words to best describe Canada’s Minister of Foreign Affairs’ visit to Hospital 57357 yesterday afternoon and his encounter with our children. Indeed, despite his busy schedule which originally planned for a short 30 minute to the hospital, the Minister ended up spending an hour and a half mostly in the company of children in the chemotherapy rooms. To an adolescent boy who found difficulty pronouncing his name, the Canadian Minister jokingly said “Dion like the famous Singer Celine Dion”.
The minute he stepped in the lobby of the Hospital where the children were greeting him with flowers, you could feel he is a man of heart and of great modesty. Instinctively, He kneels down on one knee to be at the same height of the children who want to take a picture with him along with Farhan the famous 57357 clown.

The Minister of Foreign Affairs was already informed about the Hospital by members of the Egyptian Community living in Canada some of whom actively engaged in Hospital 57357’s Canada-based non-profit fundraising affiliate, Egypt Cancer Network (ECN) –Canada. He was warmly welcomed by The Hospital’s Board of trustees President, top management, and members of ECN board. In his presentation of the Hospital, CEO Dr.Abou El Naga paid tribute to two of 57357’s most influential benefactors, Nurse Consultant Patricia Pruden and renowned pediatric Neuro- oncologist, Dr. Mark Kieran who are both Canadians. A short video demonstrated how Canada through its nationals and its successive heads of diplomatic missions in Egypt, played a strong supportive role in the establishment of Hospital 57357.

At the bedside of a Sudanese child, Dr. Abou El naga explained that although 57357 is overstretched in capacity and is embarked on a large capacity expansion project to cater to the constant increasing demand for its quality services, it is still committed to the children with cancer in its neighboring countries in the Arab World and in Africa. In a way, this is 57357’s manner to pay back for all the support and blessings it has received from friends and experts all around the globe.

At the end of his visit, Dion sent out a message of solidarity with 57357’s healthcare professionals and non-profit organizations, namely Egypt cancer Network Canada, who are devoted to safeguarding the well-being of children: Children are the same everywhere, they want to laugh, play, and dream of a bright future. To safeguard our children’s basic rights, our duty as citizens of the world is to support each other and those who take care of them with care and love as in Hospital 57357.