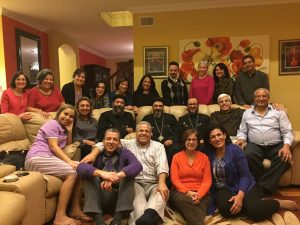 On October 30, 2016 Egypt Cancer Network held a fundraising luncheon which was hosted by Fr. Youannes and Fr. Jacob leaders of Saint Mary’s Coptic Orthodox Church of Saint Paul, Minnesota along with Chapter volunteer Mr. Ramses Sidky. The event was the first ECN event to be held in the state of Minnesota and was attended by over 100 church parishioners who were served a lavish luncheon which was provided by the church’s ladies committee headed by Mrs. Moshira Milad. Organizers of the event were satisfied it had fulfilled its fundraising and awareness goals. This was evident by the very positive comments and response received after the event.

Highlights of the event were the opening comments by Fr. Bolous Sorour, official envoy of Pope Tawadros II with respect to Hospital 57357’s support, the presentation of Dr. Sherif Abouel Naga, CEO and co-founder of the Hospital, and the interaction with event attendees by 3 Hospital physicians accompanying Dr. Abouel Naga.

Fr. Bolous shared with the audience his experiences during visits to the hospital as well as the importance of the support of the Coptic community to the Hospital and its services.

Dr. Abouel Naga’s passion and love for the hospital reflected in his presentation magnetized all the guests many of whom were not familiar with the hospital and its various services and accomplishments. Dr.Abouel Naga’s presentation included pictures of the various sections of the hospital along with recovery rate statistics. He also included in his presentation how the Hospital through its affiliate, AFNCI,  is collaborating and coordinating with other entities in Egypt on strategic initiatives and sustainability projects to raise the  levels of cancer cure, health awareness, comprehensive healthcare, education, and institutional philanthropy.

Dr. Sherif was accompanied by 3 physicians visiting from the hospital each of whom was able to answer attendee questions with regard to their specific area of expertise.

The event concluded with a Q & A which fielded a wide realm of questions from current hospital operations to future Hospital expansions including a larger out-patient facility, a proton therapy installation, a healthcare science academy, and a new 300 bed  in-patient tower which would more than double the present capacity of the Hospital.

Several local physicians attending the event expressed interest in going to Egypt and volunteering at the hospital as needed. This was the ultimate recognition of the role of Egypt Cancer Network as a bridge between Egyptian Americans living in the U.S. and their homeland Egypt!