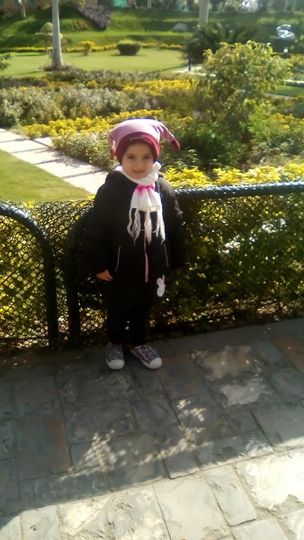 In 2018 Mariam was diagnosed with acute lymphoblastic leukemia (type of blood cancer) at the Children’s Cancer Hospital Egypt and started her treatment journey when she was only two years old.  “Diagnosed with cancer; words that parents never want to hear about their kids,” shares Mariam’s mother as she recalls the story of her daughter’s diagnosis and admission to the hospital. Mariam went through a lot of ups and downs during the treatment period.

After receiving the initial dose of chemotherapy and while being an inpatient, Mariam’s mother witnessed her daughters’ legs and hands turning blue and suddenly suffering from shortness of breath. At first, the mother thought that the symptoms were caused by the prescribed chemotherapy until the hospital’s CT scan came to reveal a congenital hole in the baby’s heart.

The congenital hole in Mariam’s heart was detected by chance. The treating team in CCHE 57357 decided to suspend the chemotherapy cycles and to perform an urgent heart surgery for the little angle. “For the second time, the CCHE 57357’s medical team was able to rescue my daughter from a life-threatening condition “, said the mother, expressing her gratitude to the 57357 medical staff at CCHE for having exerted all efforts to save her daughter’s life.  The heart surgery was not the only challenge Mariam faced as she suffered a severe chest infection immediately after finishing the 19th chemotherapy session and was sent to the intensive care unit where she remained for a whole month. “Seeing patients achieving recovery from cancer is the greatest reward” says Dr. Asmaa Hamouda, pediatric oncology consultant at CCHE57357.

After completing three years of the treatment protocol at CCHE57357, Mariam is recovering from cancer and has ambitious dreams of joining CCHE57357’s staff as a future pediatrician.