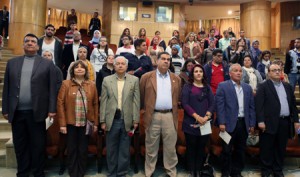 A cooperation protocol to seal the support of Guezira Sporting Club to 57357 is officially signed
Last Saturday, Dec.5, 2014 a large Guezira club delegation composed of members the board of directors including Club President, Maj. general Hussein Massoud, Secretary General, Maj. General Assem Abass, and Mrs. Iman El Zayady, board member, the members, and their youth and children came loaded with gifts to spend some time with the children.
Among the guests were a large number of children with special needs who had won sports medals this year. They were lovingly welcomed with flowers at the entrance by some of our patients and guided to the Auditorium where they listened for the first time to the story of the establishment of the Hospital. Indeed, for the majority of them, this was actually the first visit to Hospital 57357. During the welcoming session, both Guezirza Club and 57357‘s top Management expressed their earnest desire to establish strong solidarity ties between the two institutions. The two parties voiced their will to nurture a relationship which is based on mutual support and encouragement, realizing its inevitability for the growth and progress of Egypt and its future generation.

The Guezira club visit falls within the Club community’s commitment to social responsibility. As such they have chosen Hospital 57357 to be the recipient of an annual donation collected at the time of membership renewal. But most importantly, they have come together with their sports medal winning players, among whom where a large number of children with special needs, to encourage and lift up the spirits of the children with cancer. The message that the Club’s Secretary General wanted to share with the club’s youth was the following: Somewhere outside the club community, there are children who are suffering from a dreadful disease and are fighting for their lives.
In his address to the audience, Hospital CEO, Dr. Abouelnaga highlighted the need that different communities in the Society must come together to support each other. In turn, he listed the different channels of support, other than monetary donations, in which the members could engage such as volunteering time with the patients and their families. He stressed how the Hospital in turn could give back to the Club community in terms of spreading awareness about cancer and healthy living guidelines for prevention.

At the end of their visit to the children in the day-care and the in-patient section, our guests shared how much they were impressed and touched by their visit. They regretted having waited so long to come and visit. I chatted a bit with some of the medalists: Said Mohamed Mahrous, bronze medal in Swimming, Salma el Hossainy, bronze and gold in Swimming, Hatem Abdel Akhar, top African, Arab and National Judo player, ranked 6th worldwide, Farida Abdel Moneim, bronze medal in swimming, and Ali Hassan Eid, ranked 6th on the National level in diving who declared he was the first enrolling Guezira Club volunteer at 57357!