Hospital 57357, a sanctuary that opens its doors to alleviate the suffering of children with cancer 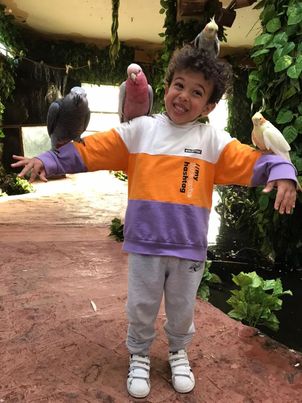 ” Wilms tumor, at the third stage of illness severity”; “the news of the traumatic diagnosis of our beloved son Hassan dropped on us like thunder,  taking us aback and away from family & friends at a time where  psychological support was needed the most”, said Hassan’s father.

-In 2018, Hassan that outgoing smiley one-year old baby boy, had suddenly lost his appetite, and that symptom lasted for a whole month, and then an abdominal mass was detected. This was the start of  Hassan’s treatment journey at  the Children’s Cancer Hospital Egypt CCHE 57357.

Upon the referral to the CCHE, we were told that Hassan had been admitted to the place where he would receive top quality care that would enable him to win won his battle against cancer.

“Truly, the CCHE 57357 turned out to be the only sanctuary that opens its doors to provide free quality care to alleviate the suffering of our kids”, said Hassan’s father.

Upon confirmation of the one-year-old warrior’s diagnosis by the hospital’s medical team as Wilm’s tumor( a common type of renal tumors in children), his treatment  journey which  lasted for six months ended happily with his victory against cancer.

“Unlike other hospitals, CCHE staff and professionals join efforts to create a friendly hopeful environment for all patients within the Hospital premises starting with the elevators area to the radiotherapy room, to the day-care’, said Hassan’s mother. ” The world’s standard treatment protocols were the weapons used to fight the disease “ said Moattasem El-Ayadi, Hassan’s primary oncologist. He also believes that the moral support provided to the family was a crucial part of the treatment plan.

“We were fortunate enough to receive a dose of hope poured into our hearts by Hassan’s primary doctor specially that the surgical intervention was a hard situation that few parents can imagine to encounter especially with their first baby”, Hassan’s mum recalled that the surgery sequence was the hardest among all stages of treatment but it was an inevitable and complementary procedure to the treatment journey.

“My father joined the hospital’s volunteering team to lift up the spirits of other patients  and to alleviate the suffering of their families’, shared Hassan’s mother, telling us that he used to come to the hospital with toys and balloons to brighten the day of  the patients.

After completing 6 months of treatment that has been extended to include six chemotherapy sessions, radiotherapy, and surgery to remove the whole tumor and visiting the emergency room several times for common side effects of the chemotherapy treatment, Hassan the young warrior is in the follow-up  phase and has been recently admitted to the nursery where he can resume his life normally.