In collaboration with the Joint Commission International, JCI, Hospital 57357 celebrated the start of the JCI diploma for the second cohort, the Mohammed Abu Eleinean class 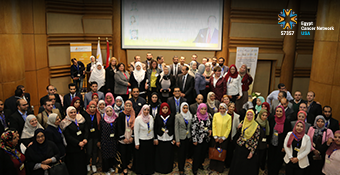 The second JCI diploma cohort includes 60 medical staff trainees coming from 18 private and governmental hospitals. The second cohort, which is named after its main sponsor Mohammed Abu Eleinean, is considered a step forward on the road of the Hospital’s commitment to knowledge dissemination and to prepare a generation of specialists capable of improving healthcare provision in Egypt. The diploma is provided for the first time in the Middle East and North Africa, and includes expert trainers from USA and Egypt.

The celebration was attended by a group of specialized professors from different medical sectors, a delegation of JCI consultants, the trainees and a group of 57357staff. The guests were welcomed by the Hospital’s General Manager and Executive Director of 57357 Group, Dr. Manal Zamzam, Manager of 57357 Academy’s Medical Programs and Dr. Hala Zayed, the Operation Manager, 57357 Academy.

The Hospital General Manager addressed the second cohort with these words: work with devotion and dedication to make real change in your hospitals through quality, continuous education and research

In his speech to welcome the attendees and Mrs. Somaya Abu Eleinean, the Hospital manager presented 57357’s historical development as the journey of hope;  since its inception as an idea and a dream until it became the renowned healthcare center of today which relies on smart education, research and the compliance with world quality standards. He addressed the new group of students saying:  “we should achieve quality in everything we do in our daily lives, so that we could build a healthy society capable of offering our children a bright future.

The General Manager explained how the Hospital succeeded to increase the number of patients by 23% in 2017, accepting a greater number of children than those accepted in all of England during 2017. He explained that the Hospital could accept more patients because of its strict quality and infection control policies, which contributed to rapid improvement of the patients’ conditions, and consequently reducing their hospital stay period.

Mrs. Abu Eleinean expressed her pleasure in supporting the program and said: “I encourage the physicians of the new cohort  to work hard towards becoming agents of change in their hospitals to contribute to the up-grading of healthcare services throughout Egypt”

Dr. Kathy Leonhardt, JCI Consultant, thanked 57357’s management and said:  “it is an honor to participate in this program, and work with this great group.” “Throughout this study, we will face new challenges and acquire new skills  to reach the goal set by 57357, which is preparing a generation of healthcare experts equipped with skills to improve healthcare provision, she added.

At the end of the celebration, the second cohort trophy was handed to Mrs. Abu Aleinean. Dr. Ola Khashaba, the First cohort Operation Manager was honored for her efforts. It was announced that 9 graduates of the first cohort were selected to be assistant instructors for the second cohort.

Through their support of the JCI program, the 57357 Group including AFNCI and ECN USA and Canada are contributing to the  improvement of the quality of healthcare services provided by Egypt’s hospitals.

While pursuing to be a model for change not only in Egypt, but in the MENA area, Hospital 57357, as a leading scientific and training hub, is keen to exchange knowledge and experiences with the entire healthcare community.