Japanese American world renowned violinist Ryu Goto plays for 57357’s children Goto: At Hospital 57357, I was enchanted by the blending of compassion with advanced care, medical treatment and expertise 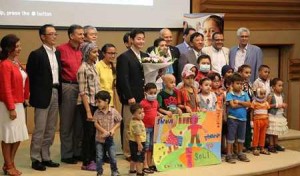 World violinist of Japanese origin Ryu Goto was delighted with his first visit to Hospital 57357. He reveals being touched by the love which prevails everywhere in the Hospital along with evidence-based practices and quality healthcare services offered for free to the children. Mr. Goto was accompanied by a Japanese Embassy delegation headed by the Ambassador of Japan to Egypt, Mr. Takihero Kajawa, and included the Japanese Cultural Centre Director. Hospital 57357 was honored by their visit and its top management warmly welcomed them. Dr. Amro Ezzat Salama, head of 57357’s Board of Trustees, expresses his appreciation to the international star for specially choosing 57357 to play the violin and entertain our children.

Ryu Goto played various pieces, delighting the audience specially the children .A group of children expressed gratitude by offering the violinist a welcome painting they had designed and executed on their own. Amongst them was a child named ‘’Shahd’’, a violin player herself, who made it a point to express her appreciation and admiration for Ryu Goto’s talent. During his tour of the facility, Goto played lovingly the violin wherever he met with the children: at the lobby, in the Day- Care Unit and other various departments .He expressed his appreciation for the high quality care by devoted professionals and the latest technology in diagnostics and treatment which are offered for free to the patients. ”My visit today means a lot to me as it made me happy just as it made the children happy.”

It is noteworthy that Ryu Goto’s special charity concert in favor of Hospital 57357’s children was coordinated thanks to the sponsorship of the Cairo Opera House in co-operation with the Embassy of Japan in Egypt and the support of Japan Foundation’s Cairo Office. Words of thanks are also in order for Mr. Takihero Kajawa, the Ambassador of Japan to Egypt and the Japanese delegation for attending the charity concert. But most importantly, it is with grateful hearts that we say “Thank you” to violinist ‘’Ryu Goto for bringing happiness to our children and we look forward to his next visit and many more.