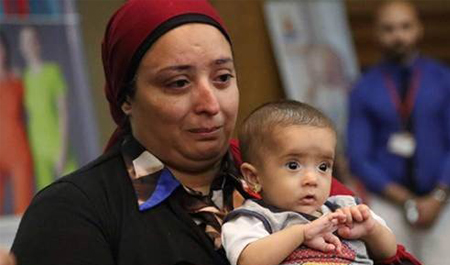 Her Mum’s Tears of joy are 57357’s ultimate reward

Farida’s treatment journey is crowned with success thanks to God’s grace and our donors’ support.

Farida’s recovery is by all standards labeled as miraculous. Farida was born with cancer. In fact lab tests revealed that she had already contracted the disease 2 months before her birth.

Farida’s mother recalls how as early as the first days of her birth, the little baby was refusing to eat because the upper part of her throat was not fully developed. Moreover she was sick with newborn jaundice. After her recovery from jaundice, they discovered a tumor at the end of her spine close to the rectum as she was not capable to move her legs. Her physician advised to rush to Hospital 57357.

She was assigned to pediatric oncologist Ahmed Ibrahim who confirmed that the tumor had been there as early as 2 months before her birth. After the fourth chemo session he prescribed, 75% of the tumor was eliminated. At the end of the fifth session, Farida started moving her right leg. At the same time she was assigned to a physiotherapist who is working on her legs since her 11th month.

Thank God, she is now able to move both legs although a noticeable weakness of the left one. Her Physician is reassuring the family that Farida will be able to walk but not before she is two years old.

Today, Farida’s recent lab tests reveal that her body is free of cancerous cells. She is staring her follow-up phase on a bimonthly basis and will undergo surgery for her throat and rectum when she gains weight