Little Renad and her mother find reassurance and serenity in 57357 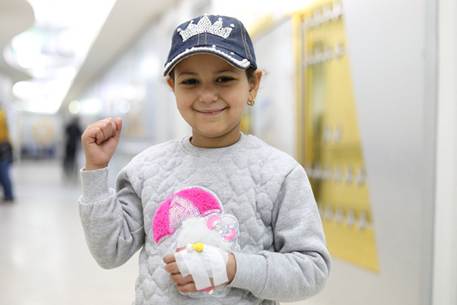 Renad is an 8 year old girl from Alshohadaa, Menoufeya, who is currently receiving leukemia treatment in 57357.” Renad used to be a very active and bubbly  child and is specially caring and considerate towards her parents and sisters, shares her mother”

In the beginning, Renad suffered from fever, sore and masses in the throat. She was diagnosed with tonsillitis and had a surgery to remove tonsils. The symptoms didn’t disappear after the surgery. After visiting more than a doctor, one of them advised her to go to Hospital 57357. When she came to the Hospital she was put on a the waiting list as there  were no vacant room for her. One week later while she was so ill, they received a call from the Hospital asking the mother to bring Renad to the Hospital. Renad was admitted to the Hospital while suffering from a severe drop in blood components. During the first week of hospitalization, physicians were concerned to restore  balance of blood components with blood transfusions . She spent a month in the Hospital  before she could start chemotherapy. Once she started chemotherapy, her condition improved. Her physician, Dr. Saly Talaat reassured her mother that she is responding well to the treatment and will defeat her illness, God willing. Currently she receives chemotherapy every week in the day care.  Renad likes the Hospital especially the art therapy workshop where she can draw and paint.

Renad’s treatment will last  three years, your support will enable her to pursue her treatment , defeat cancer and  return to  normal and carefree living.