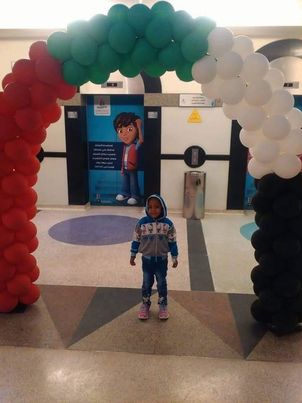 In 2016, the six year old Mariam, suffered from a persisting high fever which traditional medications failed to cure . After several visits to three different pediatricians’ clinics, an abdominal C.T scan revealed a suspicious mass upon which Mariam was referred to the Children’s cancer hospital Egypt 57357.

The primary investigations were carried out immediately upon the arrival of Mariam at the CCHE57357’s screening clinic. At first, the family thought it would only be limited to pills and a food system for some time but the C.T came to confirm the serious diagnosis of  Burkitt’s lymphoma (type of non-Hodgkin lymphoma and recognized as a fast-growing  kind of tumor). Upon her admission to the hospital, she started immediately on the prescribed treatment protocol. Thanks to the art therapy room, Mariam has developed her artistic skills during the period of hospitalization which lasted for five months.

After the eighth cycle, the regular examinations showed a relapse and the Bone Marrow Transplant was the only possible option according to her case.  The care givers team found a match with Mariam’s elder brother and fortunately the whole procedure went smoothly for the two siblings. “CCHE saved my daughter from cancer for the second time”, said Mariam’s Father, expressing his gratitude towards the hospital especially after a successful bone marrow transplant without complications.

After ten grueling months of chemotherapy and hospital visits, she was considered cancer-free in November 2018.