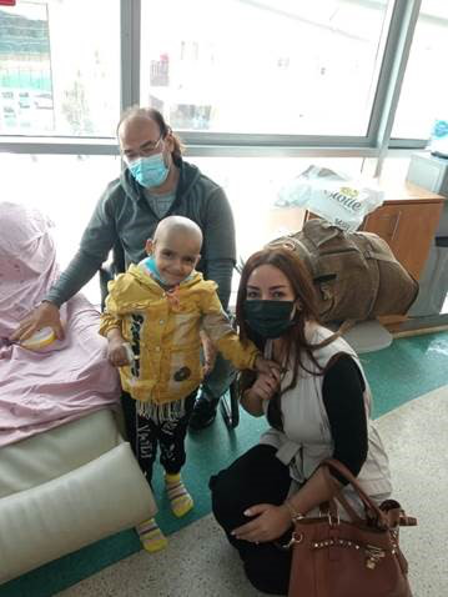 Meet 57357 patient Layla, a pretty 5 year old girl who was admitted in February 2021 with a tumor above the left kidney. Throughout the past year Laila was bravely fighting cancer. After chemotherapy and surgery to remove the tumor, the disease hit again. Laila is lucky as the disease did not progress while she was taking a second line of chemotherapy waiting for her turn to have the bone marrow transplant (BMT). Not all patients at Hospital 57357 would be as lucky as Laila to have timely access to the excellent care provided by 57357’s Bone Marrow Transplant unit , which is one of the most experienced of its kind in the Middle East.

Launched in 2009 when the Hospital capacity was half its present one, the 9 bed unit started with the autologous program but soon developed and progressed to include the allogeneic program in 2012 and the Haplo-Stem Cell Transplant program in 2019. A bone marrow transplant consists in taking cells that are found in the bone marrow (stem cells), sifting them, and infusing them back either to the donor (patient) or to another person. As such, in the case of autologous BMT, the donor is the patient himself, in the case of allogeneic BMT, the donor can be 100% matching (sibling), 50% matching( from related or unrelated donor)

Despite the increase in number of admitted patients and the introduction of more transplant programs, the number of beds have not increased accordingly. BMT is a complicated and tedious therapy involving special care and handling of patients with certain cancers or other diseases, namely leukemias, lymphomas, aplastic anemia, immune deficiency disorders, and some solid tumor cancers . In some cases, BMT is the lifeline for the patient who has gone through relapses and where traditional chemotherapy and radiotherapy have failed. As such, a bone marrow transplant can cure some diseases and put others into remission.

Presently at Hospital 57357, out of 300 eligible cases for  BMT yearly, only one third can be treated due to our limited capacity. It is noteworthy that a recent fish bone analysis in 57357 revealed the reasons why our average over-all survival rate has reached a plateau, oscillating around 72% as compared to the 80-85 % achieved in developed countries. One of the main reasons for this stagnation is the incapacity to offer a chance of cure in the form of a BMT procedure to 2/3 of eligible cases.

ECN can change the destinies of thousands of children like Laila, rekindling their hope in cure by sponsoring our BMT expansion project to increase its capacity to 27 beds. The setting up of the special clean rooms with Hepa filters, special air pressure and air handling machines as well as furnishings & medical equipment constitute the main areas needing ECN support.

The three components of the project and their estimated costs are as follows:

Whatever amount you decide to donate to this project will give a second chance to live to hundreds of children with cancer, and the opportunity of cure to many more who would otherwise be condemned from the start.