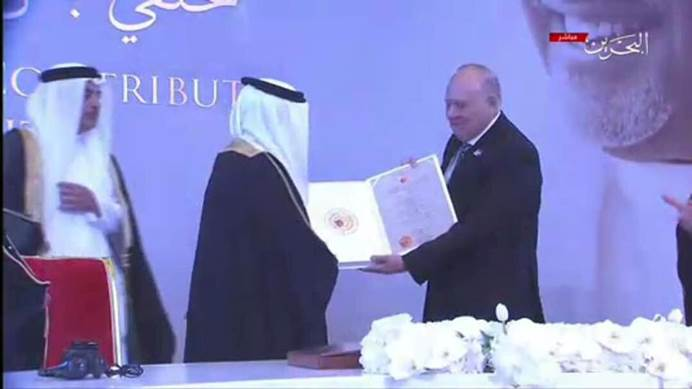 Bahrain’s deputy prime minister and chairman of the board of trusties of Isa award for service to humanity, his highness sheikh Mohammed Ben Mubarak Al Khalifa, revealed that the winner of Isa award in its third edition 2015-2017 is the Children’s Cancer Hospital Foundation Egypt.

His highness said that the Hospital was selected as the first of the five winning projects that were selected from many projects around the world.

Regarding the hospital’s activities and humanitarian services it provides, Ali Abdullah Khalifa, the secretary general of the Award, said that the Children’s Cancer Hospital is one of the most renowned healthcare Institutions in the Arab world which accomplished great success in cancer treatment of children under 18, through its provision of free, high quality services in Egypt and the Arab World, thanks to its adoption of the latest  treatment protocols and its reliance on research and evidence-based practices.

He added that the hospital deservedly earned the award for the comprehensive quality care it delivers and for its unique vision and provision for the future. This vision is being realized through the establishment of a Health Sciences Training Academy in collaboration with U.S. renowned Cancer centers and Academic institutions. To date, the Hospital has treated 18,000 children since its establishment in 2007 and recording average cure rates of 72%. The Hospital is able to receive from 300 to 500 children in the day-care area.

The board of trusties of Isa award, which is comprised of experts representing all the world’s continents, have lately reviewed a list of five organizations selected from many more which had applied for the Award from Africa and Asia. A field review team was assigned to travel to visit each of the selected organizations to verify the information they have received about them. The verification results revealed that of the Children’s Cancer Hospital came at the top of the list as it fulfilled all the terms and conditions of the founding document of the award, accordingly it deservedly earned to be awarded for  the third edition 2015-2017.

The award will be granted under the patronage of the country’s king, His Highness King Hamad Ben Isa Al Khalifa, in the evening of Saturday, June 3rd, 2017, at the Isa cultural center in Gefeir, in the presence of local, Arab and international dignitaries.

It is worth mentioning that, for its first edition, 2013, the award was given to the Malaysian Dr. Gamila Mahmoud for her efforts in the relief field, while for the second edition, 2015, it was granted to professor Aciota Samanta from India for his efforts in supporting the poor and needy.