Motivated by sincere love for Egypt, efforts are joined to contribute to enhancing healthcare services: For the first time in Egypt and Africa, the graduation of the first batch of JCI’ healthcare quality management and patient safety certificate through 57357’s Academy, sponsored by Dr. Riad Armanious. 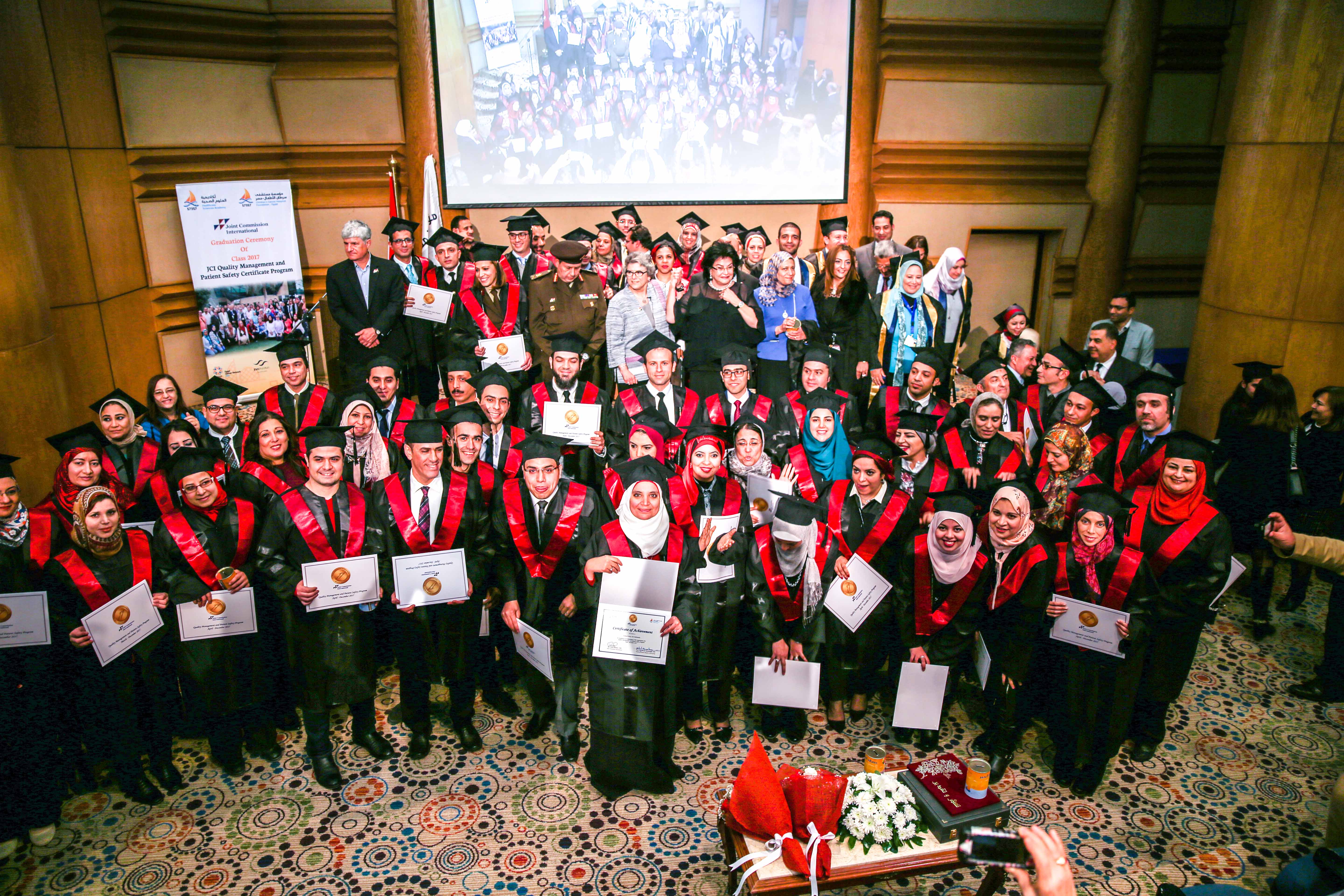 Within the collaboration between Hospital 57357 and the Joint Commission International, JCI, the second batch contract was signed, to be sponsored by “Abu Al-Enean family”

Again, Hospital 57357 celebrates the achievement of one of its dreams in promoting healthcare education and preparing generations of highly qualified healthcare professionals to contribute to enhancing healthcare services in Egypt.

The graduation event was attended by Ms. Paula Wilson, Executive Director of JCI Organization, Dr. Ashraf Ismael, Director of JCI Middle East, experts  in different sectors of the healthcare field,  co-faculty, internal instructors from within 57357 as well as external ones,  representatives from different sectors of medical services in the Army and the Police  as well as the trainees and their families. The Hospital celebrated the graduation of 60 students who completed the JCI certificate, being the first batch to receive this specific training in Egypt and North Africa. The batch was named after the businessman and pharmacist, Dr. Riad Armanious , as their main sponsor where his mother, Mrs. Mona Armanious attended the celebration to hand out certificates to the graduates.

The collaboration between 57357 and JCI to offer the certificate program is the first of its kind in Egypt, whereby 60 medical cadres from different private and governmental hospitals received the relative training under the supervision and coordination of the 57357 Academy team. The certificate which was completed in December 2017 consisted of  7 modules and lasted about a year. The program was taught by a group of Foreign and Egyptian instructors who were helped by a  co-faculty team. The practical part was carried out in Hospital 57357.

The Hospital’s General Manager and Executive Director of 57357 Group: relying on smart education and research, we seek to make significant changes in the quality of healthcare

During his welcoming speech,, 57357’s General Manager highlights that good training of healthcare professionals contributes to upgrading healthcare provided to patients and that is why 57357  pursues to contribute to the sector of healthcare training and education.” In this context, 57357 did not restrict its role to just being a treatment center, but expanded it to include a research center and a Health and sciences training academy to create a pool of  qualified professionals capable of utilizing their scientific knowledge to improve  healthcare services provided to the community”, he added. He spoke to the graduates saying: as an educational institution, we disseminate latest global scientific knowledge, now it is your role to apply what you have learned to contribute to enhancing healthcare in Egypt. He expressed his gratitude to all of those who supported 57357, and to the army and police in particular for their role in ensuring the safety and security of the whole society. He also thanked Prof. Dr. Ahmed Younes, the Director of the Association of Pediatrics for his support and for hosting the program lectures in the association’s halls.

Ms. Paula Wilson: I am proud for being part of the success we are celebrating today, and for contributing to the training of qualified healthcare professionals capable of making a difference in healthcare provision

In her speech, Dr. Paula expressed her pleasure for cooperating with 57357 and highlighted the ripple effect resulting from this type of training whereby graduates would apply the knowledge they received in their own settings, inspiring and instructing their peers to do the same. At the same time co faculty who have graduated to become faculty would be qualified to train other trainers. Change in healthcare quality provision can thus be achieved. “I am hopeful that you can make a difference each in his own hospital through the quality control standards you have learned’ she added.

Dr. Ashraf Ismael congratulated the graduates for successfully passing the program and said: today is a beginning of a new era of applying the standards you have learned. JCI is proud of being a partner of 57357 who opened its doors for education seekers and made this program available.

Dr. Zamzam thanked everyone who contributed to the success of the program and said: it is pleasure to witness the graduation of the first batch, which concurs with signing the contract for the second batch. She thanked Dr. Ismael for his support and for believing in 57357 Academy. Dr. Zamzam spoke to the trainees saying: I hope you become agents of change in your hospitals, and use your education to lead them to JCI accreditation, God Willing.

During the celebration, as they were out of the country, Dr/ Amr Ezzat Salama, Chairman of the Board of Director and Dr. Hesham Alseify, President of the Egypt Cancer Network USA, ECN-USA, called to congratulate the graduates and all the program staff.

Signing the second batch contract by 57357 and JCI, sponsored by Abu Aleinain Foundation

In a speech by Mrs. Mona Armanious, she thanked the work team and said: God blessed this hospital since its inception with the devotion and dedication of its team. Keep Egypt’s prosperity as your target and don’t forget the martyrs who sacrificed their lives to offer us security. Mrs. Armanious spoke to the graduates saying: share the education you received and utilize it to provide better healthcare, as this is the message carried by all religions.

At the end of the celebration 57357’s trophy was presented to Mrs. Armanious, Mrs. Abu Aleinain, Dr. Wilson and Dr. Ismael