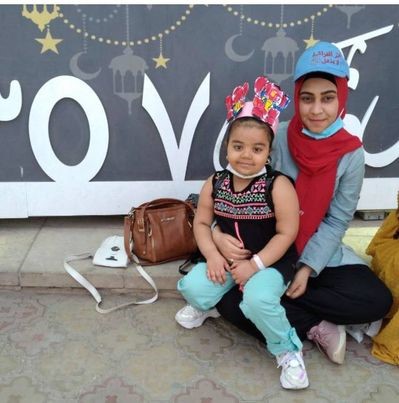 The story of the two-year-old Kholoud begins in 2017 when her mother notices her continuous crying and complaint from headache and fever. The initial symptoms  lasted for nearly 3 months and the headache became gradually frequent and severe until a mass was detected in the head of baby Kholoud which was a turning point in her life.

Kholoud was referred to hospital 57357 with many doubts about the real cause of her illness, which turned out unfortunately to be cancer.   Within hours in the screening clinic at CCHE57357, the results of the preliminary scans and tests confirmed the diagnosis of a cancerous tumor in the brain.

“Most parents feel shattered and lost upon knowing that their kids have cancer. Many thoughts come to their minds as they worry about the future of the physical condition of their beloved ones and the financial issues involved .In the 57357 pediatric oncology clinic, parents are offered some ideas for coping with their child diagnosis, moving forward, and most importantly detailed information about the disease, treatment, and the long and short side effects of the treatment”, said Dr. Rana Hamdy, pediatric oncology consultant at CCHE 57357 and the primary doctor of Kholoud.

“CCHE 57357 has given my child a second chance at life”, shares  Kholoud’s mother, expressing her gratitude towards the hospital professionals who offered her child a chance to overcome  a dreadful disease like cancer and to restore her health through  world standard treatment protocols and scientific advancements.  The mother had put her trust in the skills and the reliable knowledge of the care team givers. She was confident that they would exert all possible efforts to protect the life of her child. During six months of treatment at CCHE57357, Kholoud showed a great response to the prescribed treatment protocol and the doctors declared that she had successfully passed all dangerous stages of her treatment journey. On her third birthday, Kholoud  celebrated her victory against cancer at the hospital with a triumphant shout as a happy healthy kid.