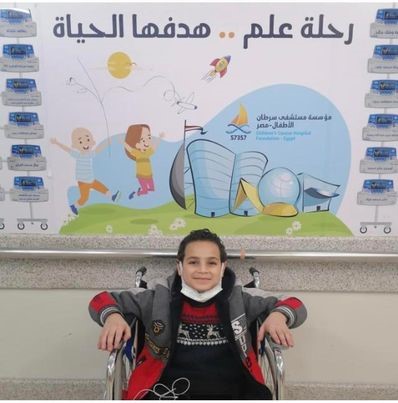 Mohamed, 12 years old, is an active soccer player for a well know club, and never missed a training session with his team.

During one of the football matches, he got injured. His coach and parents thought that getting some rest and topical medications will work for a common sports injury. Unfortunately, the pain persisted. When the parents took him to his regular pediatrician, he requested some tests and scans for the spot of the injury that showed the presence of a solid mass in the child’s leg, which made the doctor ask for a biopsy. After analysis, it became clear that the solid mass was extremely suspicious and needed to be promptly addressed. Then the doctor suggested the child’s referral to CCHE57357 for its superiority within the field of pediatric oncology in Egypt. The child visited the hospital’s screening clinic with his family where they learned that the solid mass of the young athlete is a malignant tumor detected by the superficial injury of the football match. The doctor explained the possible side effects of the treatment protocol and also mentioned that the recovery rate of similar cases treated at the hospital reached 70%. “This was a comforting piece of news and a motivation for us at all stages”, says Mohamed’s Father.  Shortly after, Mohamed started his treatment protocol in the hospital’s daycare.

“Thanks be to the Daycare unit team who cured me from cancer and motivated me to continue doing sports”, Mohamed expressed his deep gratitude towards the daycare unit staff that used to be friendly and supportive to the young warrior during his treatment period.

Fortunately, Mohamed finished the chemotherapy doses peacefully without severe side effects as a result of the treatment. After a whole year of treatment, laboratory tests showed that Mohamed had recovered though he may not be able to play football again. Nevertheless, he intends to join the swimming team as an athletic child who courageously conquered cancer.