Salma, a 57357’s heroin, who is fighting lung and bone cancer and is dreaming of becoming an interior designer 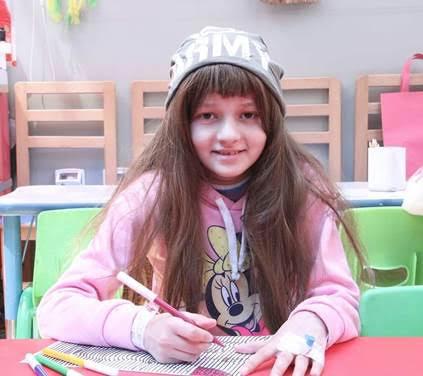 Behind each of our heroes in 57357 there is a story of a real and tough  battle against cancer. These are all inspiring stories of endurance and determination where  their courage and fortitude together with god’s will are transforming the hardship and illness into  hope and joy.

Our hero, Salma is 12 years old, she is fighting lung and bone cancer. She was admitted to 57357 in September 2019, with a cancer on the knee joint and severe pain that tied her to a wheel chair.

Chatting with Salma’s mother, she shared : we met with Dr. Ahmed Alghonaimy and he said that she needs a surgery imperatively. I got scared  and thought of the possibility that she would not be able to walk again, but he reassured me and said that she will be better after the surgery. He said that many children in 57357 went through the surgery and returned to their normal life. I was so happy when they told me that the operation was successful. She was able to stand on her legs again. They told me that the joint would need to be changed every while to suit her growing and development. 57357 is a blessing for us and our children.

Another challenge that Salma faces with bravery

After Salma’s recovery from the knee surgery, the follow up tests showed a tumor in the right lung. Doctors decided that it had to be removed, and it was successfully removed and Salma was treated with  chemotherapy. Another tumor attacked her left lung, but this time doctors decided not to remove it as it would be contained by chemotherapy. Our heroin didn’t despair, she pursued her battle and responded well to the treatment. Doctors decided admitting her for close follow up of the left lung to go through surgery if needed. Thanks be to God, Salma is stable now.

Salma: in the beginning I was afraid to be staying in the Hospital, but soon enough I found out how warm and loving all the staff was to me. They visited me in my room if I weren’t feeling well. They encouraged me to draw and color and I had many friends in the art therapy workshop, specially Ms. Amany who taught me to express my feelings trough art. I also met captain Walid Azaro, Tamer Husny and Carawan who used to sing for me in my room when I was not feeling well. Uncle Ayman used to take nice pictures for me and he with Ms. Amany celebrated my birthday in the workshop where I used to forget about my sickness.

When I grow up I wish to become an interior designer, write stories and learn how to make cartoon movies as I loved the Hospital’s cartoon ad and its designer, Amr Kamal who visited me and promised to show me how to make similar cartoons. I love 57357 a lot and pray to God to grant me and my friends healing.

Thanks to Hospital 57357’s latest acquisition , the latest technology CT imaging equipment used in bone surgeries,  Salma’s and many of 57357’s children bone surgeries are carried out with success. In 2019 a new equipment was added, explains Dr. Ahmed Alghonaimy,  57357’s bone tumors surgery consultant, which is a three dimensional CT equipment that is used in bones, disks and joints surgeries. It contributes to surgery precision, reduces surgery time, and raises success rate where it enables the doctor to see a three dimensional image during the surgery, which help choosing the best route to access the tumor. It also helps precise and complete tumor removal which gives better results and reduces potential complications after the surgery. This equipment is considered the latest imaging equipment.

Hospital 57357’s bone tumors unit is considered the first center specialized in treating children with bone cancer in Egypt and the Middle East. The surgeries are not restricted to tumor removal, also includes  compensation  of the part of the limb that has been affected by the surgery. Using latest technology enables increased meticulousness in surgeries as children, being in their development period, may need more than one surgery.