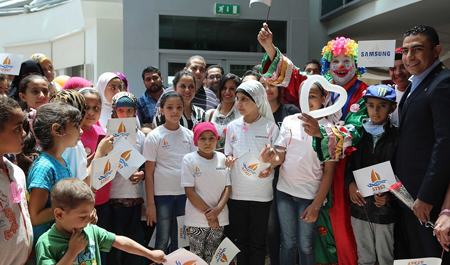 Up-coming support from the company to 57357 in the areas of research and expansion projects
Hospital 57357 welcomed a Samsung Electronics Egypt delegation headed by Eng. Sherif Barakat, VP of the company, and Ms Ragia Samir, Head of marketing. They were received by the Hospital CEO who accompanied them on their tour of the premises. They also spent time with the children in different sections of the Hospital.
Commenting on the visit, Eng. Barakat reveals: “I am sorry for having been late in carrying out this visit. I wished we would have been there since the Hospital’s inception.”
He added that 57357 was not merely a Hospital; but rather a comprehensive institution pursuing to undertake all what could be of benefit for the entire nation and the Egyptian People. This is exactly the path they have chosen for themselves at Samsung Electronics. He expressed that he was particularly appreciative of the fact that 57357 were committed to scientific research which is instrumental to the progress of nations. He pledged to direct their social corporate responsibility funds to support the 57357 institution as they are convinced that this is the best channel for these funds to trickle down and be of benefit the entire Egyptian Society. Through this support, they want to feel that they are part of the development of their community and that they play a role in its progress. They would certainly extend support to 57357’s research programs as well as its capacity expansion projects and its needs in electronic equipment.

At the end of the visit, Samsung presented an in-kind donation, air-conditions and television screens.