Setting up the latest Micro array equipment in Egypt in 57357’s new genetic epidemiology center For the first time in Egypt, researchers are enabled to push forward gene targeting therapies in this part of the world 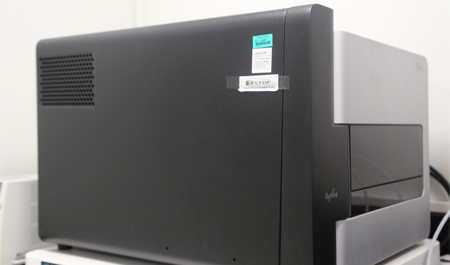 The first Micro array equipment in Egypt was received by 57357’s newly set -up Genetic Epidemiology Center of Excellence in October of 2015 and set up for operation in January 2016. The equipment is part of a L.E.10 million grant by the Science &Technology Development Fund (STDF) for the purchase of two major equipment for the setting up of a genetic epidemiology center of excellence, the” micro-array” and the “next-generation sequencer”. Both pieces of equipment will enable researchers to detect all mutations causing any given type of cancer in patients. The grant also covers the kits specific to Leukemia (ALL) which will be the starting cancer type under study by the department.

The long-awaited era of personalized gene-targeting treatment may finally start with childhood Leukemia patients at 57357. Researchers at 57357’s newly established Genetic Epidemiology Center of Excellence (GECE) would be able to screen their Leukemia (ALL) patients for genetic mutations associated with the disease, and use this information to choose the most effective treatments by targeting the altered genes.

So far, all genetic research studies have been done on American, European, and Asian populations. This will be the first time ever to carry out genome wide association studies for childhood Leukemia patients of Egyptian –African origin. In our previous collaboration with Harvard University on a certain type of brain tumor, research findings showed that we might have a different range of mutations than that found in North American population. Similarly, this research is pursuing to discover genetic causes of Leukemia in Egyptian population and in turn modify treatment methods where each patient will be treated according to his or her genetic make-up. With this genetic epidemiology unit, 57357 is also ushering in the Bioinformatics era, where training on data analysis and interpretation using high throughput instruments is widely needed.

Hospital 57357, the 320 bed largest pediatric oncology center worldwide, has along its 8 years of operations gained the trust of local and international scientific and research institutions including the Egyptian Ministry of Scientific Research’s STDF for its serious commitment to research which aims at improving patients’ care and increasing their chances of cure. The Hospital, which was able thus far to record over-all survival rates of 73% in the average, is dedicated to achieving world cure rate of 80% by the end of 2016, and beyond. To identify the unique genetic signature of cancer in Egyptian and Arab/ African children will lead to improved therapies and patients’ outcomes