Shahd’s mother: I’m a mother of two girls who were sick with cancer .. Without your support, Shahd could not have overcome brain tumor 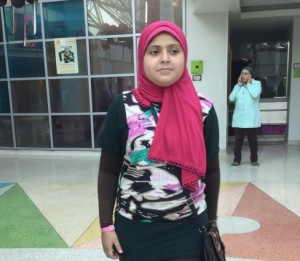 While passing by the out-patient clinics I got caught by the calmness and inner peace on the face of a little girl. she was smiling to me in such a way that I felt the urge of reaching out to her to chat for  a little while  …I sat next to her and her mother who was closely watching over her. I heard myself asking the mother: ‘What’s your story and how’s your daughter now ?’’ Shahd’s mother replied with a smile: we came for Shahd’s follow up, Shahd is thirteen years old , she was diagnosed with  brain tumor when she was four .Shahd smiled back and said : Yes I’m fine now thanks be to God and to 57357 my second home , I still come for my regular follow-up and to play with my friends !” Her mother recalls her daughter’s ordeal during the difficult period of struggle with the disease: “I was desperate and helpless when I first noticed, 8 years ago, that Shahd felt numbness all through her body’s right hand side: she couldn’t move her mouth, arm or leg, she was half paralyzed. We went to many doctors who all said she had nothing at first and that her condition was temporary. Then we discovered after doing an x-ray that she had brain tumor. I was shocked but then I remembered that I had heard about a very good hospital, free of charge called 57357 …..I watched it’s ADS on TV. I took her to the Hospital..We embarked together on the treatment journey and Shahd began her chemotherapy sessions …as you know chemotherapy is a very tough treatment and especially on a kid….. I used to carry her for a year and a half due to her inability to walk after the sessions…

‘’The hospital is way ahead than what we had ever expected or predicted or seen in the ads, It’s superior in all aspects, the doctor’s care for the patients, the devotion and commitment of nurses and all other employees, …… actually from the elevator staff to the top manager ,we received a first class treatment at 57357 in spite of being a free of charge healthcare center!” reveals Shahd’s mother. She added: can you imagine that the hospital would even provide me with transportation cost back to my hometown in the far-away province (AL-Fayoum),  when I had no money to go back as I had spent every single pound on my way to the hospital .

At this point, Shahd’s mother remembers her second daughter,” her name was Samar” she reveals .She cried in tears and said” Samar had cancer as well but we discovered it too late, I wish I had brought her to 57357 because I’m sure she would have received the best care here and she would have been saved. She passed away at the age of six  …God have mercy on her!

Thanks to 57357 donors’ faithfulness,  the Hospital is presently catering to 55% of annual pediatric cancer cases in Egypt, with your support and contributions to its future expansion program including the neuro-surgery department, it will be able to accept 80% of pediatric cancer cases and break cure records in brain tumors.