Tarek, a 57357 Tanta branch patient whose smile and high spirits are performing miracles 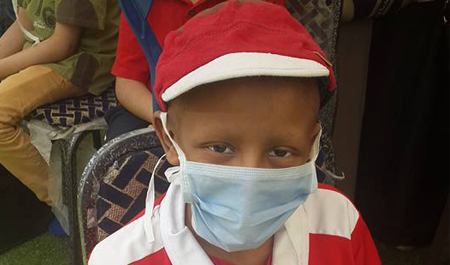 The first time I laid eyes on him was during the cartoon characters festival Hospital 57357 Cairo had organized for the children a week ago. You cannot but be charmed by his beautiful laughter. He carries a smile that lightens up his face and instills hope in anyone who reaches out to him.

Tarek is from Banha. His father is an engineer and his mother a school teacher. He is 10 years old and has three siblings. He is being treated at 57357’s Tanta branch because it is nearer to his home in Banha province.

“A year ago in May, Tarek suffered from severe bouts of vomiting. He saw several physicians among whom a neurologist who discovered that Tarek had a brain tumor” reveals to me his mother. “It is then that we hurried to Hospital 57357 where they told us that we would have to wait for two weeks before they could find a room for him” she added.
Tarek was admitted in July. He underwent an operation to remove water on the brain and then a biopsy. His physician Dr. Yasser Youssef prescribed 31 radiotherapy sessions and 12 chemotherapy ones.

The salutary advantages of 57357’s Tanta Branch
We are presently done with the radiotherapy sessions and we are taking the chemo in Tanta Branch. Thank god for the existence of this branch which saves us from the hustle of commuting to Cairo. The Tanta branch is much closer to our home in Banha. Tarek is less tired after receiving the treatment and all the Branch staff are helpful and supportive. The new Tanta branch is so quiet and peaceful.
Tidings of great joy:
Tarek’s mother informs me with tears of joy in her eyes that 75% her son’s tumor has shrunk according to recent tests and scans. His physician, Dr. Yasser confirmed the outcome and revealed that Tarek has 2 more chemo sessions to go through after which he will receive a PET/CT Scan and start the follow-up phase. Tarek is rejoicing over these results and is more confident that he will overcome the cancer.

Tarek’s feedback of Tanta Branch:
“I love both Dr. Yasser and Dr Beltagui and Miss Mervat and Mr. Hesham from the Tanta nursing team. They all joke with me and make me laugh. I find myself looking forward to my next chemo sessions because I will see them. I put down in writing all the funny moments of these encounters. I want to thank all the donors who have made it possible for me to receive treatment and to win my battle against cancer”
I asked Tarek about his dreams for the future. He answered that he wanted to be a football player with the Ahly club!