Thanks to your support to 57357, Mohammed who is a kick boxing champion will win the battle against cancer 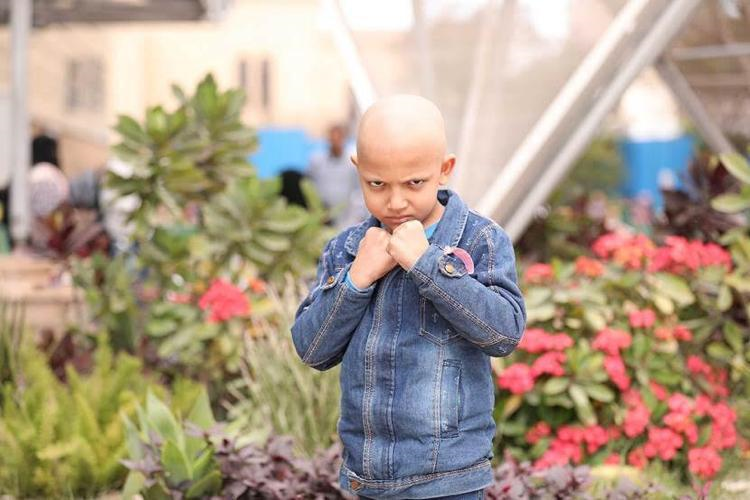 The hero of our story is Mohamed, an 8 year old patient from Almahala. Mohamed loves kick boxing and he has been practicing it since he was 4. He won many competitions and he is an outstanding student. Mohammed is bravely fighting cancer and dreams of defeating it, God willing.
Mohamed’s mother shared with us that  while he did not complain of any pain or discomfort still, she noticed a small mass in his neck. “I took him to a doctor immediately”, said the mother and after some tests he advised them to go to 57357. She goes on:” I used to watch the ads of the Hospital on TV but never had I thought that I would  one day need to take my son to be therein admitted. I was worried that they wouldn’t accept us. We went there and gave them the investigation file. When came our turn, they called us and we were admitted. We met  with Dr. Mona Fakhry who reassured me saying that he will be treated and will restore his health. After a bone marrow test, the doctor told me that he needed three years of treatment and the recovery chance is high.
57357 is our second home and Dr. Fakhry is Mohamed’s second mother:
In Hospital 57357, I found cleanliness, discipline, kind treatment besides high quality care provided by all doctors and nurses. They took good care of Mohamed and used to call us every day when we returned home to ensure that he took his medication and that was feeling good . Dr. Fakhry used to reassure me about Mohamed every step of the way. Before the start of the treatment ,she came to our room and told us that he will lose his hair with the treatment and encouraged Mohamed to cut his hair in advance and not to be sad about it as it will grow up again. To encourage Mohamed, his father and cousins removed their hair and helped him to cut his hair.  Dr. Fakhry took such good care of Mohamed both physically and mentally that I started being less stressed and more confident.  I was more comfortable when the chemotherapy started and Mohamed got better, and returned back to his usual activities.
Mohamed loves his friends in 57357,  is hoping to be cured and wishes to become a doctor:
“I am not afraid because I feel better and Dr. Fakhry reassured me. I can see my 57357 friends getting better and recovering, may God help me recover like them and return back to my normal life.” With these words, Mohamed confided in us: I love Hospital 57357 as they treat me nicely and care much about my health, they worry about me like my parents. There I made many friendships with nice people like Dr Fakhry, Mr. Marwan in the day care, Dr. Ahmed and volunteers who introduced me to the art therapy workshop and spent time with me playing video games in the play room. In this Hospital I don’t feel like a sick person, and I am confident that I’ll recover soon and become a doctor who plays kick boxing.
In 57357, we instill hope in the hearts of our patients and their families by providing them with the best quality comprehensive care. With your support, Mohammed and his counterparts will pursue their treatment and defeat cancer, God willing.
.