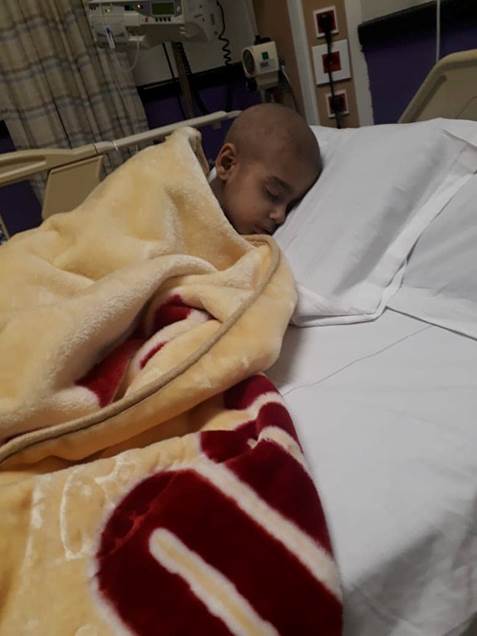 Toni’s father: I donated to 57357 because they saved my son’s life and save many children’s lives everyday

Hospital 57357 is a place that is full of heroes, young heroes who are fighting cancer, healthcare heroes who work in different fields and those who kindly donate to support our children throughout their treatment journey.

Our hero today is Toni, a 7 year old patient, who is a student in grade 1 and is fighting leukemia. He was admitted to 57357 in April 2019. Currently he finished his chemotherapy and his tests revealed that he is cancer-free. He is now in the follow up stage where he will be monitored every month for a year with his treating consultant Dr. Noura Mahmoud who told us that he is in convalescence at home and slowly getting back to his daily usual activities and going back to school.

In the beginning Toni felt great fatigue and difficulty in moving and breathing. His parents took him to a pediatrician who asked for a complete blood test which showed low hemoglobin, hence the doctor advised them to go to Hospital 57357. Toni’s father told us about their shock after he was diagnosed and their fear for his life. “When his turn came to be admitted to the Hospital, Dr. Mahmoud reassured us and promised to exert all efforts to cure him”, shares Toni’s father. Though her words were reassuring, we were still apprehensive until the tests he had after the first chemotherapy dose revealed good response to treatment. As the treatment progressed, we felt more and more relaxed despite the harsh side effects he was going through, as his physicians were confident that his condition was under control. Thanks be to god, Toni could move and play and the tests after his last chemotherapy dose were good.

Conversation with Toni about his dreams and his friends:

Chatting with Toni, he told us: I love everyone on the sixth floor, they are my friends specially Mr. Ahmed, the secretary, who shared me playing with play-station. I love Ms. Amira, Ms. Aya and aunt Hanan and I enjoy drawing and coloring in the art workshop with Ms. Samar. When we asked him about his favorite food when he was in Hospital, he said: I like the tahini and bread and used to eat them all. About his dreams Toni told us: I wish to become a doctor or an engineer, I haven’t decided yet but for sure I want to become a football player.

Toni’s father: I donated to 57357 because they offered Toni the best care and treatment for free, so I would like to contribute to treating other children

57357 amazes me, they performed a miracle and my son was saved because of them. Everyone in the Hospital is dedicated to his job while being so kind towards patients and families. The care they gave to my son is what every patient’s father would wish for, and it’s totally free. I used to see families newly admitted to the Hospital exhibiting great fear and anguish, few days later I would see them more relaxed and reassured. Physicians, nurses and all the Hospital staff are so dedicated and honest, they respect patients and treat them kindly. The Hospital is equipped with world’s latest equipment and they are in permanent improvement. I felt that I had to contribute to saving other children’s lives just as they saved my son’s life, hence I donated to the Hospital and intend to keep donating in the future so that we would contribute to the sustainability of this institution always that saves many children’s lives for free.

Our gratitude to every hero who donated and chose to be part of 57357’s children’s recovery journey.