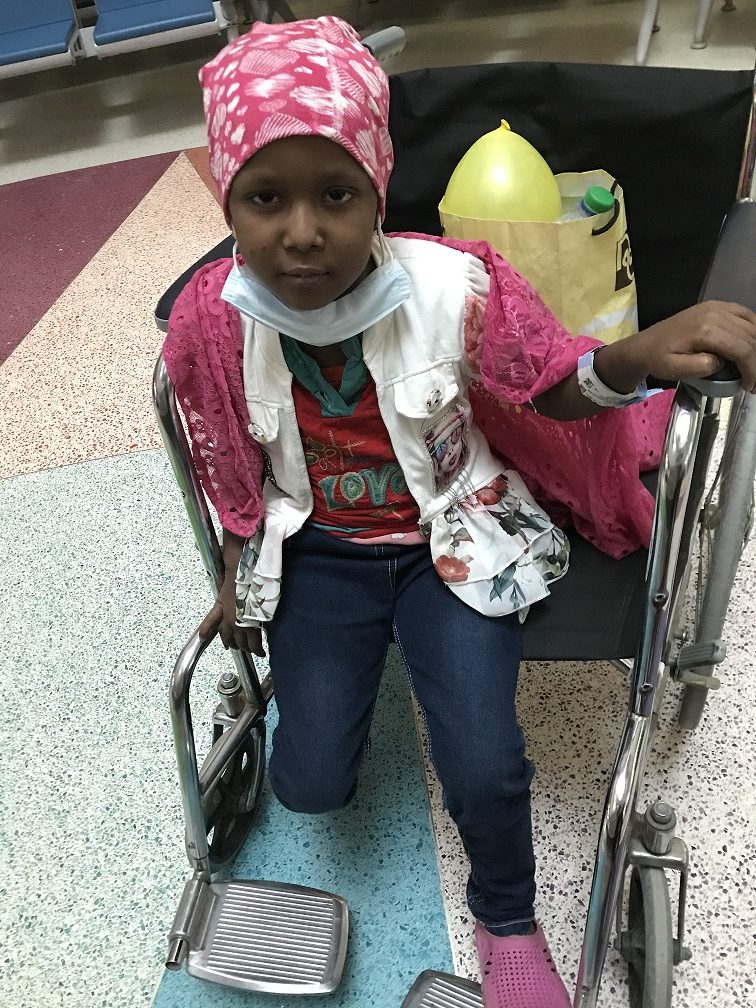 “For an instance, I thought I won’t have her back again’, Zainab’s father said to the medical team at the emergency room.

From upper Egypt to the heart of the country that beats with medical and scientific advances, Zainab Mahmoud 7 years, a pretty young girl came to the emergency room at 57357 with low vital signs suffering from immunodeficiency.

She was diagnosed with Non-Hodgkin lymphoma. Earlier to this Zainab had felt abdominal pain (stomach pain) and the appearance of a solid mass had caused her to be referred to CCHE as a suspected type of lymphoma.  After her admission to the hospital, she was sent to the ICU as a result of a tumor lysis with an elevated uric acid level, elevated serum potassium and phosphorus levels, and a decreased calcium level.

After her first chemotherapy cycle, she suffered from Pneumonia and she remained on a ventilator for three days and post-care three days.

She was doing good on Capadam m 3  until she suffered sepsis (bloodstream infection) that has led to the multi-organ dysfunction syndrome.

Zainab lasted on cardiac support for about 3 weeks with antibiotics that are changing according to the result of her blood cultures from a broad spectrum to a very specific antibiotic type targeting specific organisms.

Despite how crucial her condition was, she was too brave and responded to the received medical care inside the Intensive care unit.

“she has insisted on life and we believed in her too”, Ahmed Emad, oncology consultant, vividly recalling the story of Zainab. As a result of suffering from a severe brain infection, she was sent to the ICU for the fourth time. “you have saved my beloved child more than once from death”, said, Zainab’s father, expressing his gratefulness for the superior quality medical support that his daughter  was receiving.  She was fully comatose. the neuro team  decided on making  neuro drain getting colistin (an antibiotic that is used as a final recourse for multidrug-resistance in pneumonia infection).

Two months later after finishing her treatment protocol, the brave young child had successfully undergone a bone marrow transplantation and now is in the process of following up and of having dreams for a future that is free of cancer and treatment too.