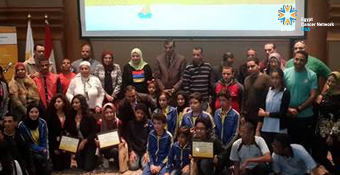 A competition event challenging the students’ capabilities in science and engineering

Hospital 57357 celebrated the annual scientific contest for school students which featured the participation of 10 schools from different governorates, such as Qalyoubeya, Gharbeya, Suhag, Cairo and Giza. The Hospital was honored by the attendance of Mr. Hesham Alsengary, Head of Services and Activities Sector, as representative of the Minister of Education, Eng. Ahmed Refat Abu Almagd, Director of the Arab Institute for Advanced Technology of the Arab Organization for Industrialization, Mrs. Abir Mohammed Al-Iraqi, General Manager of the Authority of Exploration Centers and Ambassador of World Federation for the Protection of Children, Dr. Amr Elnashar, member of 57357’s Research Department and Sheikh Mahmoud Alshobki, from Al-Azhar.

The annual contest is an initiative by 57357 in response and recognition to the continuous support of Egypt’s students to the Hospital since its inception. The contest aims to promote social responsibility and sense of belonging among students of public, experimental and private schools throughout the Republic,  encouraging their creative thinking and helping them to integrate within their communities and share in their development process.

It is noteworthy that one of the winners of the first prize in the engineering field is one of 57357’s heroes who defeated lymphoma cancer.

The prizes given to winners included tablets and products of the contest’s sponsoring companies, in addition to certificates of appreciation from the Hospital. The prizes were offered by Mr. Alsengari, Eng. Abu Elmagd and Mrs. El-Iraqi. Within the celebration, the MSE teaching team that is responsible for teaching at the in-Hospital school, was honored for their efforts with our sick children.

We would like to express our appreciation for all the participating students, who represent future scientists, with your efforts Egypt will have a bright future.